This slow cooker Christmas pudding is a game changer if you normally steam your Xmas pud on the hob.

Packed full of vine fruits, glacé cherries, apples, citrus peel, spices, nuts and rum, this recipe is based on a traditional plum pudding with a few modern twists.

It's an easy pudding to make, where the ingredients are simply mixed together then popped in the slow cooker.

Easy peasy and tasty too.

Christmas pudding is a huge British tradition that is still going strong today.

This rich, fruity pudding is more like a hot fruit cake than a light pudding and is always the ceremonial centrepiece after the main meal.

It originated in the 14th century as a sort of porridge called frumentry. This contained vine fruits, prunes, spices and meat such as beef or lamb.

At the time it was eaten as a fasting meal, ready for the Christmas festivities.

By the 1600s it had become more of a plum pudding, with the addition of beer or spirits and breadcrumbs. At the time the word plum referred to dried plums (prunes), and all other dried fruit.

It became a Christmas dessert around 1650, with the Victorian version being very similar to what is eaten today.

Typically, it is decorated with a sprig of holly, doused with brandy and a flaming Christmas pudding is brought to the table with much 'ooing' and 'ahhing'.

This is normally the culmination of a pudding that has been steamed or boiled to cook and then steamed to reheat, so no wonder it was so awe inspiring! So much effort.

Rather than steaming a pan, and checking the water for hours on end, it makes much more sense to pop it in the slow cooker and forget about it. Much safer than an unattended pan in the kitchen, and it means you can go out and leave it to work it's magic.

I've added my own choices to this pudding and it's easy to swap some of the ingredients if you would like to.

And, if you think that my slow cooker Christmas pudding is pale compared to its supermarket counterparts, it is. However, in one Mrs Beaton recipe I notice that they added gravy browning. This one is just natural!

It's a great time to use up all of those half opened bags in your pantry too.

❤️ Why you will love this recipe

💙 Save this recipe for later

Did you know? When you see the 💙on the right hand side, you can bookmark the page to save it for later, or share it too.

This is a long list of ingredients, but they are mainly pantry staples.

The recipe card with ingredient quantities and detailed instructions can be found at the bottom of the post.

Chop the almonds into pieces.

If you prefer, use a food processor but just pulse the nuts until they have your preferred size.

I like plenty of crunch so I've left small and big pieces.

Peel and cut the apple into 1 centimetre cubes.

Put the flour and spices into a large mixing bowl and combine.

Add the breadcrumbs, suet, sugar, almonds, apple cubes and all the dried fruits.

Stir the mixture together.

Place the treacle in a small saucepan over a low heat to loosen it then pour in the rum, stout and orange juice and zest.

When the mixture has combined, turn off the heat.

Beat the eggs together and whisk into the liquid.

Add the liquid to the dry ingredients and mix thoroughly.

Cover the bowl with cling film and leave overnight ideally for the flavours to develop.

Grease the base and sides of the pudding basin with butter and line the base with a circle of baking parchment.

Spoon the Christmas pudding mixture into the basin.

Cut a large circle of parchment paper about 30 centimetres diameter.

Make a pleat in the middle then tie it around the rim of the basin.

It's helpful to have another pair of hands to help with this or use a couple of pieces of tape temprorarily to hold the paper in place while you tie it.

This will allow the pudding to rise slightly.

Place the basin in the slow cooker and pour boiling water from a kettle to come two thirds up the sides.

Remove the pudding and leave for a few minutes before turning out onto a plate to serve.

And, there is always someone at the table that just doesn't like dried fruit!

See if you can tempt them with one of these traditional desserts instead.

Swap the nut or fruit quantities for some of these ingredients.

Traditionally it's made on the last Sunday before Advent, which is 5 weeks before Christmas.

Technically, if you make it in this timeframe, you can wrap the pudding in clingfilm and then in a sealed bag in a cool dry place and leave it until Christmas day. 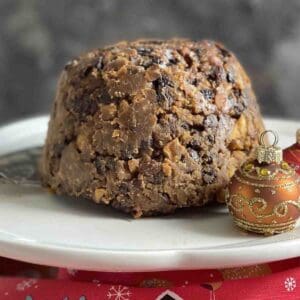 Keyword plum pudding, slow cooker Christmas pudding
Tried this recipe?Let us know how it was!

Do you have a question or did you make the recipe?

Please leave a rating as it helps other readers to discover the dish. Your name and email are required to avoid spam comments; they are never used for any purpose or shared with third parties

However, due to spam comments, I do have to moderate each one, so don't worry if you cannot see your comment immediately. I'll publish your comments as soon as I can.