Here's my version of a simple roast gammon, that's full of taste, but is so easy to do.

Whether you are cooking a gammon or ham for Easter, Christmas or another celebration, this one is the perfect edition.

Roasted first with the skin on for crispy crackling, then smothered in a honey mustard glaze, this gammon is fabulous hot for a roast or cold for a buffet.

With step by step instructions, and options for soaking and boiling too, your honey roast ham will be a breeze to cook.

I guarantee your guest will love it too. And, if you have leftovers, there are so many ways to use it too.

Christmas, Easter and summer buffets are just not the same without the centrepiece of a honey roast gammon or ham.

I tend to get mine prepared a day or two in advance to save time, but that doesn't mean that I want to spend loads of time soaking, boiling, roasting then making a complicated glaze.

With lots to do I opt for this simple roast gammon, which works for a ham or bacon joint too.

However, I know that sometimes the meat is way too salty for some people, so I'm including the different ways of soaking and cooking to suit every palate and oven space too!

Why you will love this recipe

Unsmoked gammon is one that has been cured with salt to preserve it. Regular salt is normally mixed with salt containing nitrates, which help to stop bacteria growing. It tends to have a mild flavour.

A smoked gammon is one that has first been cured and then subsequently smoked. The flavour is much more intense and can vary depending on the wood used for smoking.

The choice of smoked or unsmoked is up to you. I tend to use smoked, because I prefer intense flavours. However, in my opinion both varieties can sometimes be overly salty, depending on the production.

How to remove salt from the ham

If you are worried about the meat being too salty, then you can soak it in water.

It is normally safe to soak the ham for up to 72 hours, but usually overnight is sufficient. If you are soaking the ham for more than 4 hours then the water should be changed regularly every 2 hours.

When you have finished soaking the ham rinse it well in cold water, as the salt still tends to cling to the surface. Dry well with kitchen paper.

Alternatively, place the meat in a large pan with sufficient water to cover and bring to the boil for 10 minutes, then drain and rinse. Slice off a small piece to test for saltiness.

Line a large deep roasting dish with plenty of foil to hang over the sides.

This is to protect the meat and also to catch any excess glaze from becoming encrusted on the roasting dish.

Remove the meat from the fridge 30 minutes before you plan to cook it to bring it to room temperature and get it prepared for the oven.

If the meat isn't scored already cut parallel lines or diamonds into the skin, then dry with kitchen paper.

Rub half of the salt into the skin, paying particular attention to the fat in between the cuts.

This will help the skin to open out.

Leave for 30 minutes then wash off the salt with cold water and dry the skin with paper towel.

Rub the skin with the oil and sprinkle over the remaining salt.

Place the meat in the roasting dish and scrunch up the foil to protect any areas of meat while leaving the skin uncovered.

Roast in the oven for 20 minutes to get the heat into the fat, as the hot fat puffs up and forms the crackling.

Continue roasting then remove the meat from the oven 30 minutes before the end of the cooking time.

The crackling should now be ready.

Pull the foil away from the meat but leave it in the roasting dish.

Use a carving knife to remove the crackling and set aside to cool.

Trim off any excess fat if you wish, to leave an even layer.

Mix together the honey and mustard in a small bowl and use a pastry brush to cover the meat.

Return the meat to the oven for the final 30 minutes to bake the glaze.

Rest the meat for 30 minutes in a warm place before carving if serving hot.

If serving cold, leave the simple roast gammon to cool completely before slicing.

There are plenty of different side dishes, but I think these ones go particularly well.

How else can you cook gammon?


It was very popular to simmer the gammon for the cooking time, which you may prefer to do if the meat doesn't have skin.

Place the meat in a saucepan with enough water to cover and bring to a simmer then cook for the recommended time as if roasting. Keep the water topped up periodically, so that the meat is not exposed.

Alternatively, remove the meat 30 minutes before the end of cooking and roast in the oven as a honey roast ham.

You can also simmer the meat for half the time and roast for half if you prefer.

What is the difference between gammon, ham and bacon?

Gammon and ham both refer to the cut of pork taken from the hind legs.

Boiled bacon was a popular dish traditionally. This refers to cured pork shoulder that was boiled until it was cooked. It was often served with boiled potato carrots and cabbage.

Of course, the bacon we generally refer to is cured pork from the belly of a pig.

What can you make with leftover ham?

There are so many dishes that you can make with simple roast gammon.

Serve cold in slices for a salad and serve hot with roast chicken or in a toasted sandwich with cheese.

Cut into chunks to use in a pie like turkey and ham, pasta bakes or salads.

Chop into smaller pieces to use in rice dishes, soups, French peas, leeks in white sauce, tartiflette or add to potatoes dauphinoise. 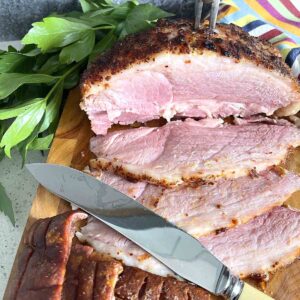 Keyword honey roast ham, roast gammon
Tried this recipe?Let us know how it was!