You may have heard of leeks in white sauce, but have you tried them with crisp fried bacon on top?

Halved leeks are cooked until tender, topped with my easy cheats version of white sauce, then sprinkled with bacon are absolutely delicious!

Serve them with your favourite roasts, chops, or as a meal on their own, for a comforting dish that is ready in about 20 minutes!

I've adapted this recipe from the old frugal British recipe called belted leeks. I can't believe that I've never heard of it until now, so I have to share this with you.

We often have cauliflower and broccoli cheese, but there are so many vegetables that taste great in a sauce, and leeks are one of my favourites.

This is an easy recipe that you can make as a side dish for a Sunday roast or serve as a main meal.

The best bit is that there is no need to stress about making the sauce. My cheats version of a béchamel sauce is ready in minutes and is perfect in this recipe.

Of course, bacon makes everything taste better too!

What are belted leeks?

I found reference to this recipe when I found it looking at a recipe book for frugal cooking in an antique shop.

The recipe was very popular in the 1940's and 1950's, when food was scarce, but unfortunately, I have not been able to find the origin of the recipe.

It's a main meal consisting of whole leeks in a white sauce, with crisp bacon rashes laying across the leeks, acting as a belt.


I'm sure, in frugal times, that the milk may have been made with dried milk powder and the sauce thickened with just flour or cornflour.

Wash the leeks and remove the outer leaves if necessary.

Trim both ends and cut the leeks into portions.

For 2 large leeks I cut them in half.

Place them in a pan of boiling water and simmer for 5 to 10 minutes until tender.

Turn off the heat and leave them in the water to keep warm.

While the leeks are cooking make the sauce.

Put the milk, butter, flour and seasoning in a small saucepan.

Use the whisk to mix in the flour then turn on to a medium heat.

Keep whisking continually as the butter melts and gradually the mixture will thicken as it come to the boil.

Turn the heat down and let it cook for a minute to cook the flour.

Check the seasoning and add the grated nutmeg.

Next, put the lardons in a cold frying pan or skillet over a medium heat.

Fry them for 2 to 3 minutes, stirring occasionally, until they are crisp and golden.

Drain the leeks thoroughly and place them in a serving dish covered with foil.

Gently reheat the sauce and pour over the leeks.

Scatter the cooked bacon over the top and serve. 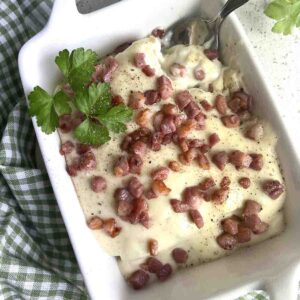 Leeks in white Sauce with Bacon