I love to serve this at Christmas time as it's a perfect way to use up leftover ham and those vegetables left at the bottom of the fridge!

This is a great family dish as picky eaters can't find the vegetables and it's naturally gluten free too.

Delicious as a starter, lunch or dinner for family and friends.

My family are big soup eaters and they are quite happy to have a big bowl of this soup with a hunk of bread for dinner.

There's nothing like a warming bowl of soup in the winter and it's even better when you have all the ingredients to hand.

Although celery, onions and carrots are traditionally used, it's easy to add many vegetables that you have leftover rather than let them go to waste.

And, as for that festive ham? We always have lots leftover for pies, pizzas and pasta, but those little pieces from the carving tray are perfect to pop into soups.

So, although this is a frugal soup, it's hearty enough for a meal, a starter when you're entertaining or a filling lunch.

Set half of the bacon aside.

Heat a tablespoon of the oil and the butter in a large heavy saucepan.

Add the bacon and fry for 2 minutes.

Tip in the vegetables and cook, stirring occasionally, for 10 minutes.

Pour in the stock and split peas then add the lid.

Bring the mixture to a boil then simmer or an hour until the peas are tender.

While the soup is cooking make the garnishes for the soup.

Slice off the crusts from sliced bread and cut into cubes about 1 cm or half an inch.

Heat the remaining butter and oil in a frying pan over a medium heat and add the cubes of bread.

Fry for a few minutes, turning regularly, until they are golden and crisp.

Tip them out onto kitchen paper to drain.

Use the same pan to dry fry the remaining bacon.

When the soup has finished cooking let the mixture cool for a few minutes.

Use an immersion or stick blender to blend the mixture. I prefer to leave some texture in the soup, but either way it will be naturally thick without adding any flour.

Serve the soup with the croutons and bacon sprinkled over the top.

This soup will keep for a week in the fridge.

If you have made the soup from scratch, without using any leftovers then you can also freeze this soup for up to 3 months.

Why is the soup called London particular?

In the first half of the 25th century London was regularly blanketed in thick fog, known as a 'peasouper'. So what was originally a pea and ham soup became known by this name instead. 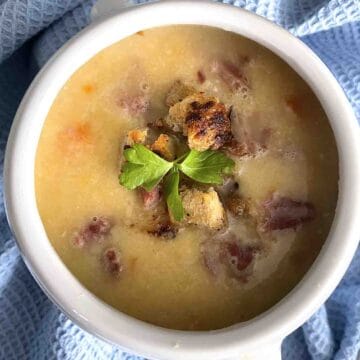