Have you tried lemon syllabub yet?

This traditional British recipe is also known as old English syllabub. It's full of old fashioned spices, including all spice, cloves and cinnamon, but it's deliciously light and creamy.

The lemon and spiced brandy cream dessert sits on a bed of crushed ginger biscuits, giving it the feel of a cheesecake, but so much quicker.

Perfect for making ahead, this boozy dessert is great for entertaining. It's made in just a few minutes and only takes an hour to set.

Go and grab a spoon!

The basic recipe for lemon syllabub, or everlasting syllabub, can be traced back prior to the 17th century in Cornwall, when it is said to have been made by pouring fresh milk, straight from the cow, on to spiced cider or ale and creating a frothy foam as a drink.

After a time, the recipe evolved to use cream, wine and spices to create a dessert on it's own. It can also be used as a topping for trifle or as a sauce.

More importantly, there are so many ways that you can vary this dish by adding fruit, biscuits or changing the flavours too.

This version is the traditional spiced version, but feel free to leave out the spices entirely if you prefer.

Why you will love this recipe

Zest the lemon, taking care to take off only the yellow, as the white pith is bitter.

Juice the lemon. If you don't have a lemon squeezer, cut the lemon in half and squeeze over a bowl and use your other hand to catch the pips.

Put the spices, sugar, zest, lemon juice and sherry in a bowl and stir so that the mixture dissolves.

Pour the cream into the spice mix, whisking continuously.

Continue to whip until the cream reaches the soft peak stage.

This is when it just holds its shape, but is still very soft.

It's very easy to overwhip cream and turn it into butter, so be cautious.

Alternatively, put the piscuits into a plastic bag and use a rolling pin or can to break them up.

Divide the biscuit mixture between 4 glasses.

Divide the lemon syllabub between the glasses

Leave in the fridge for an hour to set before serving.

If you don't want to use a crumbled biscuit base then serve with a delicious biscuit on the side for dunking and munching.

What is the difference between lemon posset and lemon syllabub?

Both of these dishes mix dairy with alcohol, originally creating a curdling effect.

However, syllabub, also known as everlasting sylaabub, is served cold and doesn't separate.

Posset is served warm, very typically as a drink, and often given to people who are sick. The milk was heated and then curdled by adding spiced wine, spirits, or ale. Egg yolks were often added as a thickener or to create a smooth thin custard-like drink. Later, lemons and oranges were used as part of the flavoring and for their acidic juices to aid the curdling. By the mid-18th century posset tended to be thickened with ground almonds, crushed biscuits, or egg yolks instead of alcohol. 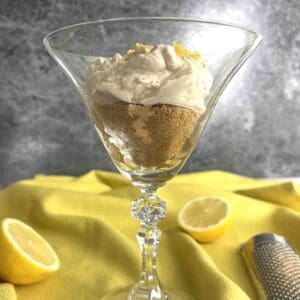 Keyword everlasting, old English, syllabub
Tried this recipe?Let us know how it was!