This recipe for vegan mincemeat couldn't be easier to make, with no cooking involved.

It's just the measuring of ingredients, mixing, maturing and potting - so simple and very satisfying.

Once made, it keeps for a long time, so it's the perfect make ahead Christmas treat.

Make it as a gift, or for your own Christmas baking, and you can tweak the ingredients too.

Rich, fruity and boozy, this is the perfect treat at Christmas.

There's something deeply satisfying about making your own mince pies and for that you need mincemeat! Not the store bought kind, but proper homemade mincemeat that tastes delicious.

This vegan mincemeat uses vegetable suet, but all of the other ingredients are traditional and easily available in supermarkets.

Although you can follow this recipe exactly, it's also easy to add your own favourite ingredients or leave something out. The best bit is that you get to use up those annoying small amounts of dried fruit, which always seem to go unused for months on end.

As there is no actual cooking involved, but plenty of measuring and mixing, this is a great way to get the kids involved in the kitchen too.

❤️ Why you will love this recipe

💙 Save this recipe for later

Did you know? When you see the 💙on the right hand side, you can bookmark the page to save it for later, or share it too.

The recipe card with ingredient quantities and detailed instructions can be found at the bottom of the post.

Chop the ginger into small pieces and chop the nuts roughly so that there is plenty of crunch.

Grate the zest of the orange and lemon and grate the apple.

Put all of the dry ingredients into a mixing bowl with the zest and apple.

Mix well and then juice the orange and lemon.

Add the juices to the bowl with the rum and mix.

Cover the bowl with clingfilm or a clean cloth and leave for 2 days, stirring occasionally.

This allows the dried fruits to plump up and absorb the liquid.

At this point it will smell amazing!

How to sterilise jars

It's really important to sterlise any container that you are using for preserves as bacteria can easily develop and spoil the contents.

I tend to recycle jam jars and lids to use with preserves. It's advisable not to use a jar lid that has been in contact with vinegar as this destroys the seal. Remove any old labels and glue by soaking in hot water.

Heat the oven to 130 C or 270 F .  Wash the jars and lids with hot soapy water and rinse well without drying them. Place on an oven tray with the jars open and the lids flat on the tray. Heat for 15 minutes.

If you are using preserving jars with rubber seals place them in a saucepan, cover with water and boil for 2-3 mins to sterilise.

Alternatively, sterilise any jar, lid or seal in the dishwasher. You can do this if you have an intense setting. However, the items should be sterlised on their own and not with dirty dishes. This means that it it not a very economical method!

For best results, fill the jars when they are still warm from the oven and when your preserve is just ready and still hot. This will reduce the chances of any bacteria growing in the jar.

For the vegan mincemeat, allow the jars to cool slightly and then pack the mixture into the jars.

Label the jars and leave for 2 weeks to let the ingredients mature.

Of course, the main use for mincemeat is to make mince pies to snack on or to serve with Christmas tea. Try some of these ideas.

Why is it called mincemeat?

Originally mincemeat contained beef or venison along with the dried fruit and beef suet.

It was commonly used to make savoury pies or pastry filling. Gradually, over time, the meat element has diappeared.

Nowadays, it is very often made with vegetable suet.

Homemade mincemeat is sweet, rich and quite heavy on the alcohol, which is usedalthough store boughy mincemeat contain much less alcohol, if any and contains other preservatives instead.

If you enjoy fruit cake containing dried fruits, you will enjoy this.

What else can you make with vegan mincemeat?

Aside from mince pies, individual or large mincemeat tarts are also made.

It's a great stuffing for baked apples, or can be added to muffins and biscuits. 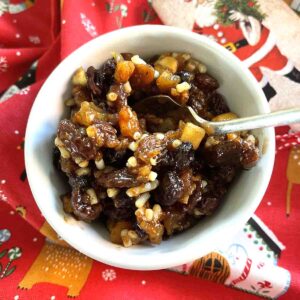 Keyword vegan mincemeat
Tried this recipe?Let us know how it was!

Do you have a question or did you make the recipe?

Please leave a rating as it helps other readers to discover the dish. Your name and email are required to avoid spam comments; they are never used for any purpose or shared with third parties

However, due to spam comments, I do have to moderate each one, so don't worry if you cannot see your comment immediately. I'll publish your comments as soon as I can.