Monkfish tails or stargazer fish are often affectionately known as poor man's lobster and in this recipe you won't be disappointed that you are not eating lobster at all.

With boneless fish fillets, stuffed with lemon slices, wrapped in bacon and baked in the oven, this is a luxurious, healthy dish that is perfect for special occasions, such as Christmas Eve.

This dish is also easy to prepare in advance, giving you more time to relax and have fun!

What is poor man's lobster?

This is a term, predominantly given to monkfish, as it is a ground feeder like lobster and has a firm flesh without bones. It has a delicate flavour that is sweet like lobster and holds it's shape without flaking.

It's found all around the British Isles all year long and varieties are also found all over the world with different names, such as:

In fact, I actually prefer this fish to lobster and one monkfish tail has so much more meat. Here's why I think that you will love this dish.

There's just a few simple ingredients in this dish.

If the fish still has its skin on then use a sharp knife to loosen it and peel it off. There may be fins on the outside but these are easy to slice off.

Place the monkfish on a cutting board and use your fingers to feel for the backbone down the middle.

Start cutting along the length of the bone, trying not to leave any flesh behind. Repeat on the other side of the bone. You will end up with two fillets.

Cut the top and base off the lemon with a paring knife and carefully remove the remaining skin.

Cut the lemon into slices and remove any pips.

Lay the slices on the cut side of one of the fillets.

Arrange the bacon on a chopping board, slightly overlapping but with enough to cover the length of the fish.

Season with the pepper then place the other fillet on top.

Wrap the bacon around the fillets then tie at 4cm, 2 inch intervals with string.

Heat the oil in a frying pan over a medium heat and sear the fish all over to get a golden colour.

Leave the fish to rest for 5 minutes, loosely covered in foil, before carving into slices.

Now you can enjoy your poor man's lobster, baked monkfish tails, stargazer fish or whatever you call it where you live!

If you have any fish leftover then cool to room temperature, cover and refrigerated for up to 3 days.

To reheat, wrap it in foil and heat in the oven.

How else can you cook monkfish?

Monkfish cooks really quickly, like prawns so it's great for easy preparation and quick cooking.

Cut each fillet into 2 and fry for a few minutes each side in butter and oil.

It also goes well with cut into chunks of monkfish with chorizo for a quick 15 minute dinner.

It also works well threaded onto skewers with prawns and vegetables and grilled. 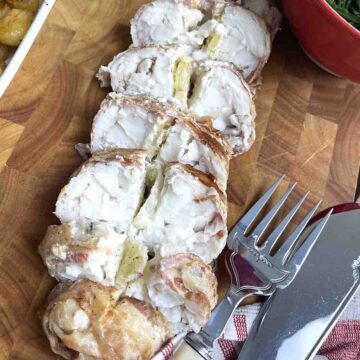 Keyword monkfish tails, poor man's lobster
Tried this recipe?Let us know how it was!