Watercress sauce is very easy to make with just three ingredients, so you can make this in minutes with no cooking involved.

Perfect as a sauce for salmon, or other fish, this vibrant and creamy sauce really does taste as good as it looks!

It's simple to customise this sauce too, by using different herbs so you can enjoy it with salads, vegetables and meats as a dressing, or even a dip.

I grew up in Hampshire, in the south of England, and we would often visit the town of Alresford which is famous for its watercress beds. In Victorian times watercress became very popular for its health benefits and the train route to London is still known today as the Watercress Line, as it used to take the freshly harvested watercress to London to be sold at Covent Garden.

In Great Britain it has always been a popular leafy vegetable and watercress sandwiches were often eaten by poorer people as it was readily available growing naturally near water.

Watercress has a peppery taste, similar to mustard cress and it has a juicy crunch too. It is delicious in poached (or tinned), salmon sandwiches, and it makes a perfect soup too.

It's easy to make the watercress sauce with just a knife or with a blender.

To make it by hand put the watercress in a big pile on a large board.

Chop it into small pieces like chopped herbs. It's easiest to do this with a large knife across the board, then gather the chopped watercress into a pile and chop again, until you are happy with the results.

Zest the lemon and juice it.

Mix the watercress, lemon and crème fraîche together in a large bowl.

To make the sauce in a blender, start by roughly chopping the watercress into smaller pieces. If you put it in the blender without chopping it tends to spin around but not evenly chop.

Next add the the watercress, lemon juice and zest to the blender and process until the consistency is right for you.

Tip the sauce into a presentation bowl and a few watercress leaves for garnish.

Since crème fraîche won't split or curdle when heated you can also put the mixture in a saucepan to heat if you are serving it with hot fish. It is best to heat it just enough and take it off the heat so that the sauce keeps its green colour.

Although delicious, this watercress sauce for salmon is great with other dishes too!

Store the sauce in the fridge covered with plastic wrap for up to 3 days.

This sauce is not suitable for freezing.

Is watercress a superfood?

Watercress is a nutrient dense leafy green which is full of antioxidents and low in calories. It is rich in vitamin A (via beta-carotene) and vitamin C, and a source of folate, calcium, iron and vitamin E. It also contains a variety of phytochemicals including glucosinolates, lutein, flavonoids and hydroxycinammic acids.

It's definitely a super food! 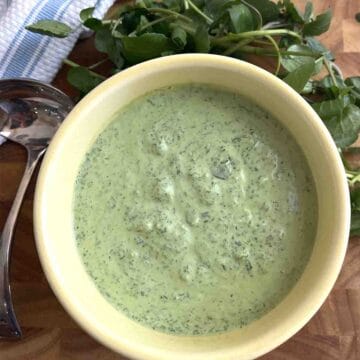 Keyword creme fraiche, watercress sauce
Tried this recipe?Let us know how it was!